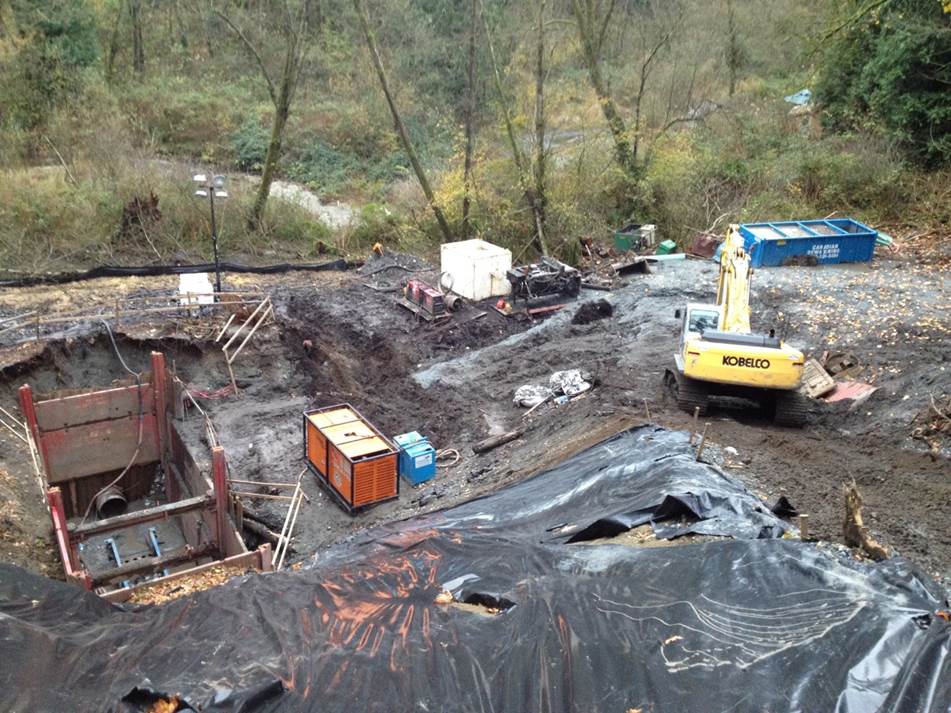 Doug McFee spells out the problems with the construction of the water pipeline to Aldergrove.

There is much more to the story about the East Langley Pipeline crossing of the Salmon River at 52nd Avenue than what Langley Township officials want people to believe. This project is a graphic example of what is wrong at the Township.

Yet again we see politicians and senior staff kowtowing to development interests; taxpayers footing the bill for township pandering to developers; the community not respected, not listened to, and kept in the dark; and environmental protection at the township impotent.

This timeline says it all.

2010 – Without investigating, council falls for misleading propaganda from development interests and changes the East Langley pipe route from 64th to 52nd Avenue, despite the township having just sold the right of way at 52nd and despite the 52nd route likely requiring a difficult, expensive, and environmentally damaging crossing of the important Salmon River.

2013 and early 2014 – Our fears turn out to be well founded, as the township plans to drill under the river from the bottom of the ravine, which would result in extensive damage to the ravine and its habitat. Directional drilling from the top of the bank, as was done for the water line to TWU, would route the line under the ravine, leaving the ravine and the river intact.

April 2014 – An incomplete and misleading report from township engineering to council downgraded directional drilling, claiming a vague risk of hydraulic fluids getting into the river, despite also saying that directional drilling is a common means of crossing under rivers. The chosen method is said to be $1 million cheaper, and is described as creating “minimal disturbance and disruption.”

It makes no sense.

There is no mention in the report of the risk of destabilizing banks by removing trees and running heavy equipment on the bank, permanent tree loss down the bank and near the river, or a protected tributary and Pacific water shrew wetland habitat (also protected) on the east bank that will be destroyed.

There is no proper analysis of the true costs of the chosen method, including the need to pay for right-of-ways down the bank, the costs to clear a difficult area, the unforeseen costs that may occur working in a wet and unstable area, or the costs to rehabilitate the area.

A right of way is negotiated, and residents are promised that there will only be a 15-metre working zone down the banks of the river, with relatively few trees removed. The working zone ends up being much wider than promised, causing extensive damage to the bank.

Massive tree removal included trees on the neighbouring property. The township did not bother to ask the neighbour for permission or give notice.

When drilling became difficult, the township intruded well within the 30-metre no-go zone, removing trees and digging up the area looking for rocks.

The area is backfilled, but is now unstable and subject to blowing out when the river rises in winter rains. The eastern wetland is turned into a sea of mud mixed with clay. The coded stream, two other small tributaries, the wetland, and its protected habitat are demolished.

Attempts by the community to alert the township to problems at the site were met with inappropriate and combative responses.

It is clear that the township has not yet developed a plan for rehabilitating the area.

Drilling and equipment problems galore (what do you expect when you are working in a wetland?) put the project far behind schedule, and undoubtedly, well over budget.

“Minimal disturbance and disruption” and saving money have proven to be far from the truth. No one else would be allowed to ignore the known no-go zone or start a project ignoring protected streams and habitat while not having any firm plans in place for rehabilitation or compensation.

The Township has much to answer for.

One thought on “Timeline spells out the problems”