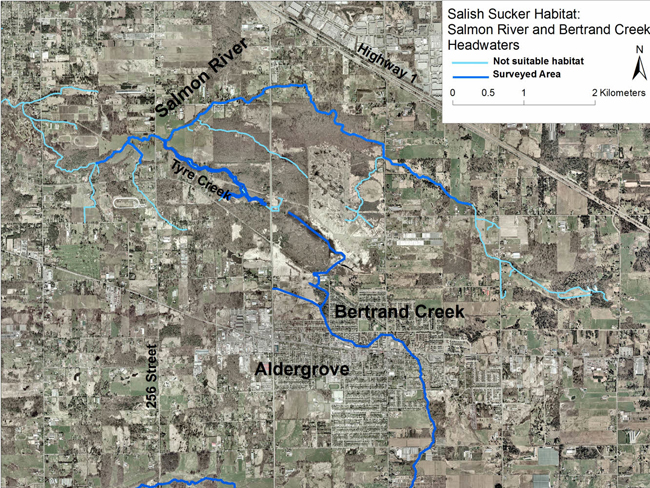 There are less than 750 Salish Suckers in the Salmon River, not including juveniles in their first summer, according to a trap and release program in the fall of 2013. It’s a low number, but better than many Salish Sucker populations in Canada. Salish suckers are an endangered species. The main threat, as in many watersheds, appears to be poor water quality, especially low oxygen levels in summer. Low summer flows and excessive agricultural nutrients are likely the root causes.

Most of the Salish Suckers found in 2013 were located in Tyre Creek, a tributary that starts on the Department of National Defense lands and enters the Salmon River close to 256 St.

Traps were set in the upper Salmon River at 133 locations between Aug. 27 and Oct. 29.  Traps were set a second time at 92 of these locations between Sept. 9 and Nov. 14. A total of 334 Salish Suckers were captured in the first sampling session, 253 during the second trapping session, of which 112 had been marked in the first session. Thus, 475 individual Salish Suckers were encountered.  Population estimates for each reach yield an estimate of 726 individuals in the watershed.

There does not appear to be a viable population on the floodplain in Fort Langley. The couple of individuals caught over the years are vagrants from the main population shown by the dark blue line on the map.