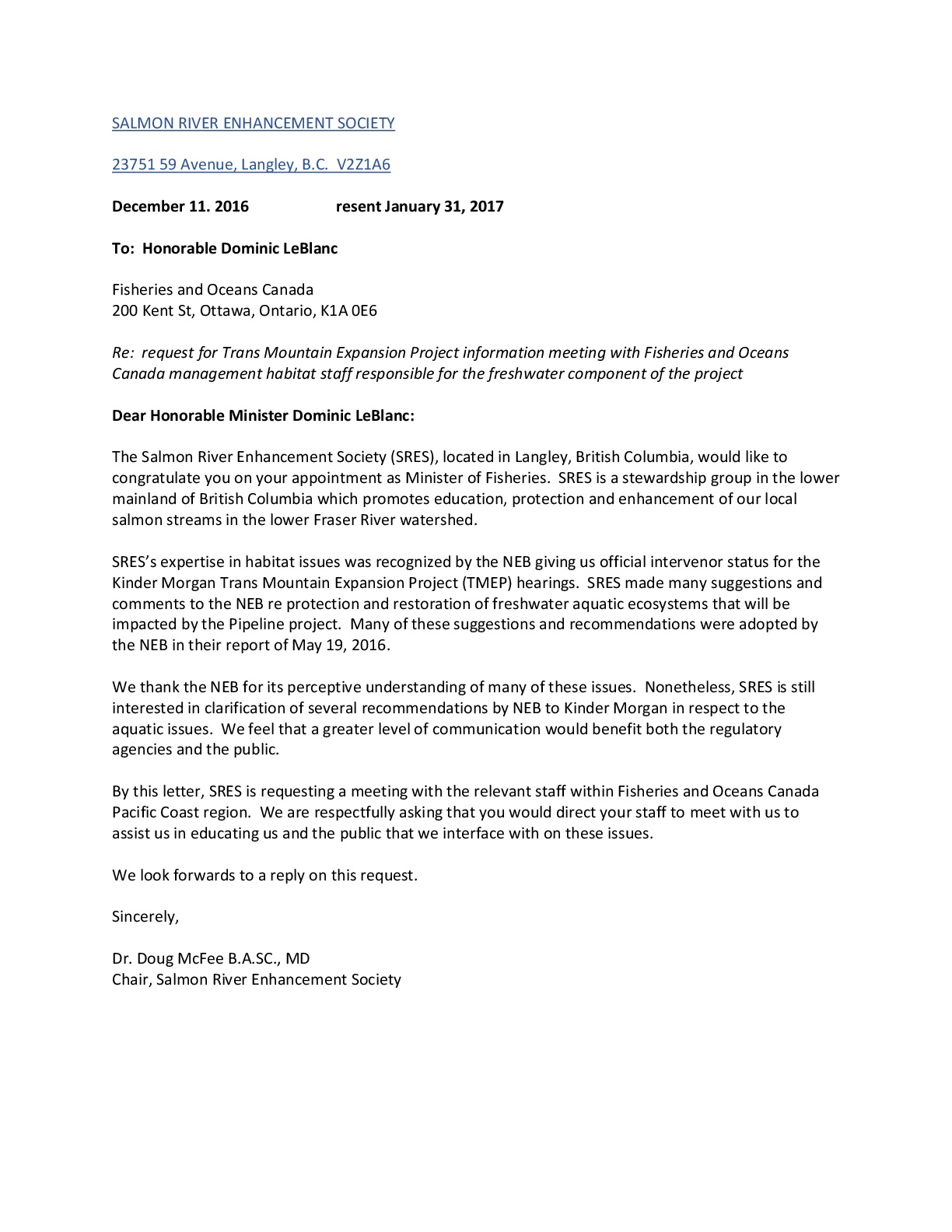 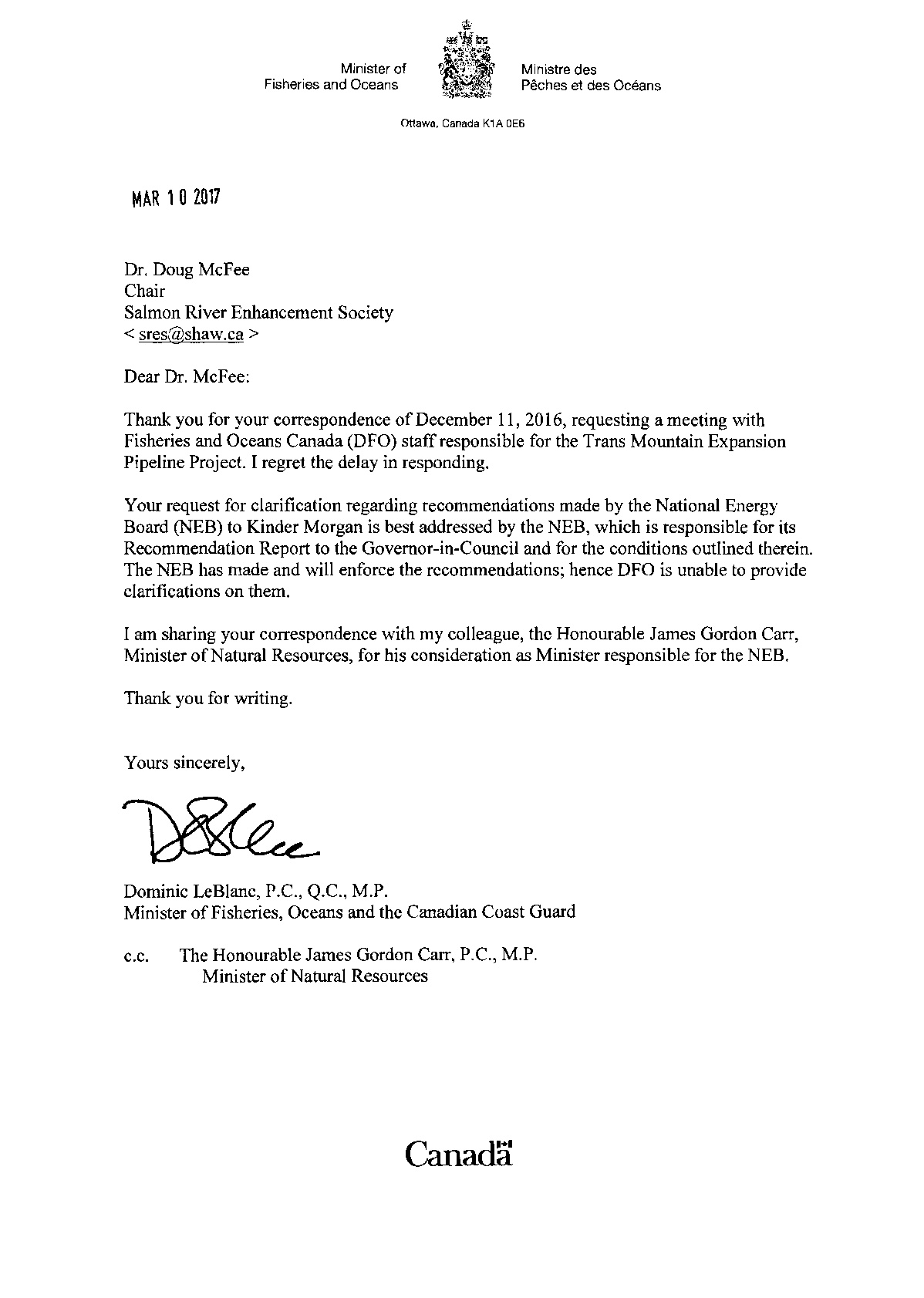 DFO Challenged to Do Their Job by SRES

re:  Reply to our December 2016 letter about TMP and DFO

To:  Honourable Dominic LeBlanc, Minister of Fisheries and Oceans Canada

Thank you for your letter of March 10, 2017.  We are puzzled, however, by your assertion that the NEB is solely responsible for enforcing recommendations in regard to TMP.  The appended pages from the NEB decision document make it clear that NEB is expecting DFO to be involved in a very significant way in many aspects of this project including ensuring that TMP uses directional drilling for streams with species at risk and in regard to protection of riparian areas.

As such we feel it is appropriate that SRES, as a significant participant in the NEB hearings, have the opportunity to meet with the DFO personnel who will be involved in this process.  We continue to believe that directional drilling/trenchless technologies are the standard that TMP should be held to not just for streams with species at risk but for all significant streams that the pipeline will cross.

We also believe that a much better job must be done of preserving riparian habitat than what was done with the first phase of TMP already completed (i.e. Anchor loop).  As you will see if you consult our website www.salmonriver.org, riparian impacts on National Parks crossed by Anchor Loop were severe with poorly planned and executed mitigation measures.

We would like to lend our expertise to ensuring that the larger TMP project is planned and executed to a much higher standard and that any residual impacts are compensated appropriately.  Only if this is done will be these aspects of the project meet “the highest environmental standards” as promised by The Honourable Justin Trudeau.

1)  “The Board, and Fisheries and Oceans Canada (DFO) entered into a Memorandum of Understanding (MOU) on 16 December 2013. Under the MOU, the Board has the responsibility to assess potential impacts to ﬁsheries from proposed NEB-regulated pipeline and power line applications, and notify DFO if any such works may likely require authorization under the Fisheries Act. DFO would then be responsible for issuing any Fisheries Act authorization(s).”

2)  re SARA    “Under the MOU with DFO, the Board has the responsibility to determine if proposed projects would impact aquatic species at risk, and to notify DFO of such impacts. DFO would then determine if permitting may be required under the SARA.”

“In order to identify which crossings could result in serious harm and may likely require authorization under paragraph 35(2)(b) of the Fisheries Act, Trans Mountain conducted a self-assessment of the potential for serious harm to ﬁsh57which evaluated the risk from proposed watercourse construction activities. The results of Trans Mountain’s self-assessment indicated that numerous proposed primary (26) and contingency watercourse crossings (46), predominately timed to occur outside of least-risk windows, were of high risk for serious harm. It committed to obtaining Fisheries Act authorizations when they are required, which would include measures to oﬀset any residual serious harm, as well as potential speciﬁc monitoring requirements. Trans Mountain indicated that the types of oﬀset measures would include habitat restoration and/or enhancement, habitat creation, biological or chemical manipulations, and/or complementary measures, including research-based projects, as deﬁned in DFO’s hierarchy of preferences. It noted that any Fish and Fish Habitat Oﬀset Plan would be designed in consultation with regulators, ﬁsheries managers, Aboriginal groups and other stakeholders, and with speciﬁc consideration for the guiding principles outlined in DFO’s Fisheries Productivity Investment.”

“DFO said that the proposed mitigation measures may eﬀectively mitigate potential localized eﬀects on Nooksack dace and Salish sucker, but that trenchless crossings are preferred methods for reducing impacts on ﬁsh and ﬁsh habitat.”

“The Board agrees with participants that ﬁnalized, site-speciﬁc information is needed to make an accurate serious harm determination for higher risk crossings. In order to fulﬁll the responsibilities of the National Energy Board under the Memorandum of Understanding with DFO, the Board would impose Condition 43 requiring Trans Mountain to ﬁle site-speciﬁc information with the Board, prior to construction. The Board will use this information to conduct a site-speciﬁc review of each of the proposed watercourse crossings where Trans Mountain cannot meet all of Fisheries and Oceans Canada’s Measures to Avoid Causing Harm to Fish and Fish Habitat, and to verify the results of Trans Mountain’s self-assessment of the potential for serious harm. The Board would refer to DFO any watercourse crossing activities that may likely require authorization under the Fisheries Act. DFO would then be responsible for issuing any authorizations. The Board would impose Condition 110 that requires Trans Mountain, in the event it requires a Fisheries Act authorization(s), to ﬁle any ﬁnalized authorizations with the Board prior to construction. The Board notes that if any Fisheries Act authorization(s) are required for the Project, DFO has acknowledged it will undertake consultation with potentially aﬀected Aboriginal groups. Trans Mountain also committed to developing any Fish and Fish Oﬀset Plans in consultation with regulators, ﬁsheries managers, Aboriginal groups and other stakeholders.”

*This letter is as-yet unanswered by the Minister for the Department of Fisheries and Oceans.