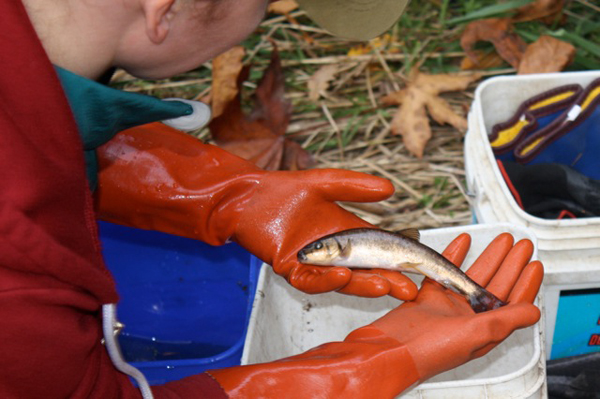 One of several Salish suckers found in the river’s uplands last fall. It was tagged and returned.

Unfortunately, extensive fish harvesting eventually led to the extinction of the Salmon River ’s pink and chum salmon stocks. The Salmon River remains, however, the most productive stream for its size in the Lower Fraser Valley for coho and cutthroat trout. Even the chum have made their way back into the river with counts as high as 800 per year in the last decade. Steelhead and at least 12 other fish species, including the rare and endangered Salish sucker, make their home in the Salmon River.

The Salish Sucker is an inconspicuous fish that is confined to a small area in the Fraser Valley and northwestern Washington State. This contrasts sharply with the range of its nearest relative, the Longnose Sucker, which is found across northern North America and into Siberia.

The Salish Sucker is a very rare species in B.C. and northwestern Washington, said Biologist Mike Pearson. “It’s an irreplaceable part of B.C.’s heritage. It’s relatively tolerant in terms of habitat and water quality, but you can think of it like the canary in the coal mine. It’s been here for thousands of years and if it’s gone it suggests there’s something seriously amiss. And that will affect everything else, including people.”