Trees and streams are at stake, say local environmentalists.

Local environmental activists are turning their fire on the Trans Mountain pipeline expansion plan as National Energy Board (NEB) hearings begin in earnest this week.

On Saturday, Jan. 23 the Salmon River Enhancement Society (SRES) will be presenting their oral arguments against the expansion.

The local environmentalists are worried that the pipeline expansion will punch through local creeks and disrupt trees, wildlife, and fish spawning habitat across multiple local waterways.

“In the Township of Langley, the new pipeline would cut across not only the Salmon River but also West Creek,” said SRES chair Doug McFee. “Locally Nathan, Yorkson, and West Creeks would be negatively impacted as will hundreds of streams and wetlands provincially.”

On West Creek, Annabel Young for the SRES and fisheries expert Dr. Martin Rosenau pointed out the spot where the pipeline crosses.

In the creek, sizable rocks create a bit of whitewater, and the banks are narrow. Built in the 1950s, this crossing point for the pipeline was designed to keep the bank stable and avoid erosion.

“This is a disrupted ecosystem,” said Rosenau.

He’s worried it could be disrupted further, with heavy equipment brought in and the pipeline right of way likely widened, at least during construction. Trees that are second growth – up to 100 years old – could be removed across a broad swathe of land.

West Creek, where Rosenau has done research for decades, is home to coho salmon, cutthroat and steelhead trout, and some chinook juveniles.

He’s worried about how construction of a bigger pipeline could affect the watershed.

The creek never dries up completely. Rosenau and Young, who lives near the pipeline, said that even in July and August West Creek never completely dries up, as some smaller streams do.

The way things were done in the 1950s was not ideal, but that was decades ago.

“By now, the mindset should have changed,” said Young. 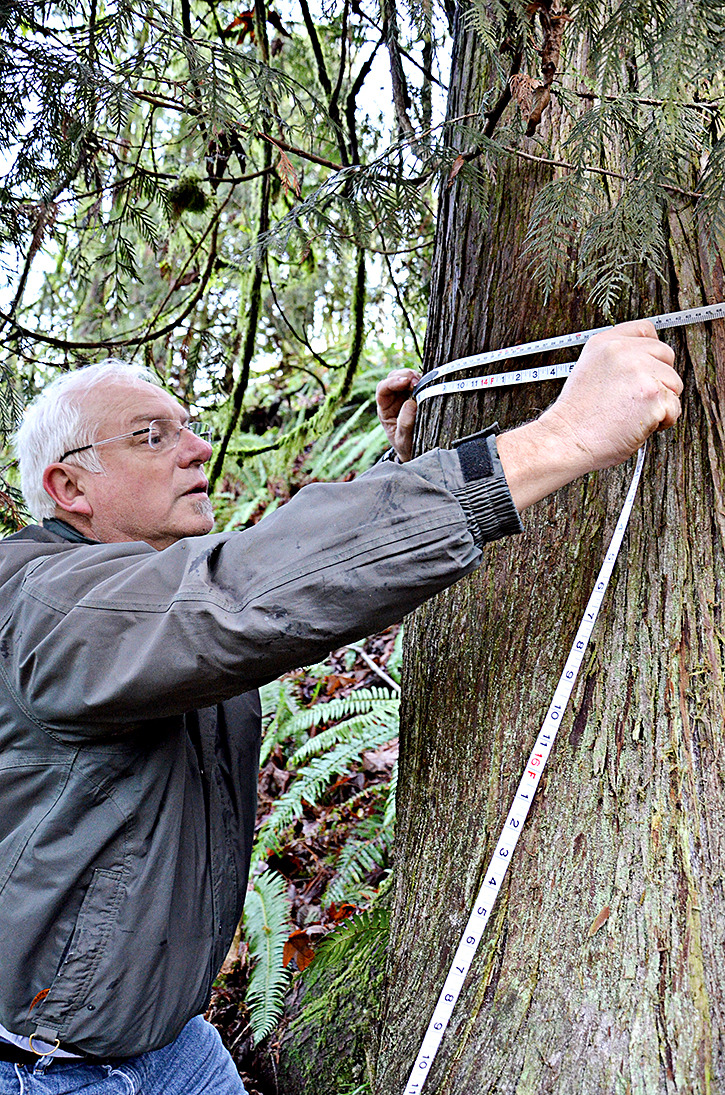 Although there are some long term worries, Rosenau and Young are also worried about the short term impacts of installing the new pipeline.

“Notably, Trans Mountain Pipeline is mostly refusing to use directional drilling under streams and wetlands to avoid damage to sensitive habitats,” Rosenau said.

Directional drilling is expected to be used on the Salmon River.

However, streams like West Creek might be trenched instead – a large ditch would be dug straight across the stream and the water diverted while the pipeline is installed.

“The crossing method chosen will be based on the width, streamflow, channel morphology, subsurface geology, sensitivity, and approach slopes,” says the Trans Mountain plan.

Like many municipalities and the province, Young and the SRES are frustrated at not having received answers to all the questions they presented to Trans Mountain.

They received answers to fewer than one fourth of a series of questions they sent to the oil company.

The provincial government said it would not support the project at the NEB hearings, largely as a result of a lack of information on spill response plans.

“The Kwantlen First Nation is still pressing ahead with engaging the NEB process in the courts, and will continue to assert our Indigenous rights and title until the matter is dead,” Brandon Gabriel said via an email. Gabriel has been a key organizer of local protests against the project.

“The pipeline issue isn’t over and neither is our resolve,” Gabriel said.

Reposted from the Langley Advance.